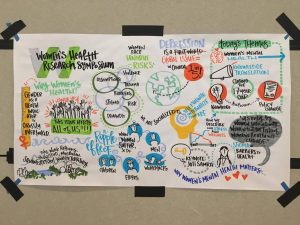 On April 26th, the 2nd annual Women’s Health Research Symposium was hosted by the Women’s Health Research Institute (WHRI) at the AMS Nest Building at the University of British Columbia. The conference was attended by over 150 researchers and investigators from a wide range of disciplines who came together to celebrate the current research being conducted surrounding women’s health. The symposiums allowed for provincial leaders in women’s health to come together, share results and generate discussion in order for the collaboration of provincial leaders to advance the health of women in BC. The focus of this year’s symposium included knowledge translation and women’s mental health focussing on intersecting issues such as marginalization and stigma. The format of the symposium allowed for in depth discussions and audience engagement as there were research presentations, facilitated discussion sessions and an expert panel of leaders representing BC Women’s Hospital, the UBC Faculty of Medicine and research at the Provincial Health Services Authority.

The morning on the symposium largely focused on discussions surrounding women, mental health and the stigma of mental illness. Depression does not discriminate based on socioeconomic status or geography, and it is an issue that is showing increasing rates of suffering, predominately in women. Given depression is the leading cause of worldwide disability, it needs to be attributed appropriate attention. Dr. Joti Samra, an innovator in psychological health and wellness, gave the morning’s keynote address and highlighted the broad factors that affect women’s overall mental health if we hope to implement an effective strategy to combat these increasing rates. Presentations that followed focused on postpartum depression, as currently 1/5 women in lower income countries experience postpartum depression, the transgenerational nature of depression, as depression seems to be passed from mother to daughter, along with eating disorders. The morning also included a special presentation meant to highlight an emerging women’s health issue, in which Dr. Annabel Mead, Director of the St. Paul’s Hospital Goldcorp Addiction Medicine Fellowship, talked about how to provide optimal care for women during Vancouver’s opioid crisis.

The latter half of the symposium discussed knowledge translation and methods to bridge the current 17 year gap between research and practice. Erica Ehm, founder of YummMummyClub, spoke about both art and science of knowledge translation, and outlined an example of how researches can partner with social media influencers in order to reach more people as information tends to be lost with the current approach largely focused on scientific findings.

As the symposium was coming to an end, Madame Sophie Trudeau joined the event through a video message. In her video, Madame Trudeau discussed the importance of the symposium and its positive impact on women’s health throughout Canada. Moreover, Madame Trudeau congratulated Dr. Deborah Money on her receipt of the WHRI Career Contribution to Women’s Health Research Award for her outstanding research conducted with respect to women’s health in the province and globally throughout her academic career.