Message to members from Dr. Lori Brotto: A history of the WHRI 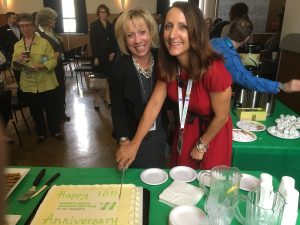 The Women’s Health Research Institute (WHRI) was proudly established by BC Women’s Hospital & Health Centre in March 2005 after the Ministry of Health announced it would provide $2M in funding to create an Institute designed specifically to address the growing need for in-depth research into women’s health. The Provincial Health Services Authority contributed an initial $400,000 to the development of the WHRI, and continues to financially support the institute today. The WHRI was fully launched in October 2006 and established initially as a not-for-profit society reporting to a volunteer board (inaugural board chair Dr. John Gilbert followed by Eileen Stewart) with Dr. Deborah Money selected as the Institute’s first Executive Director. The Institute became the first of its kind in Canada devoted solely to improving the health and health care of girls and women throughout the province of BC, to serve as a catalyst for research in women’s health and to support an expanding national network of women’s health researchers, policy makers and healthcare providers. Under the unfaltering and tireless leadership of Dr. Deborah Money, the WHRI became a Canadian leader in sex- and gender-specific research in women’s health. Membership in the institute grew quickly, as there was much interest among existingwomen’s health researchers to form a collaborative. Success was clearly evident in the number of peer-reviewed grants obtained by members (measured in the millions in the first few years of the WHRI). Furthermore, WHRI seed grants provided to members consistently leveraged much larger federal grants such that our return-on-investment was in the thousands. The WHRI was, and continues to be, reactive to the women’s health needs identified by government, industry, international partnerships, and the community. To support the expanding staff, WHRI offices also expanded from a single room to an entire wing in the 3rd floor Shaughnessy Building at BC Women’s Hospital, with additional space across the Oak Street Campus. It was evident that the institute was growing in numbers, momentum, support, and strategic vision. From its inception, Dr. Money and the WHRI wanted to cross all pillars of science in women’s health research, and see research through from knowledge creation to knowledge usage.

The original mission of the WHRI, “to generate new knowledge and evidence-based solutions that inform and transform the health and heathcare of all women” continues to drive our collective work today at our 10 year anniversary. In its inaugural annual report, the WHRI promised to “pilot a new future for women’s health research and open up new possibilities for women’s lives”. As we reflect now, 10 years later, we are proud of the dedication shown by Dr. Money, the WHRI staff, and members across the province, and we are excited to catalyze the achievements of this past decade into solidifying the WHRI as a truly province-wide network of women’s health researchers united with a single mission to improve the lives, health, and well-being of women, girls, and newborns.